Fortunately, iRobot offers the i7 in a version without its drain base. This does away with the main novelty of the vacuum cleaner, but in return, it saves 300 euros as it is sold for 899 euros.

The best worker of the year makes noise

If there is one thing iRobot is uncompromising about, it is the quality of cleaning offered by its robots.

Indeed, in the face of the offensive of low-cost manufacturers and products such as the Roborock S6 or the Deebot from Ecovacs, the history of the sector is uncompromising on the basics, in this case, its ability to remove dirt whatever the type of floor.

As such, the i7+ is in the pure tradition of iRobot and maintains the level of quality that its predecessors have demonstrated.

Small dirt and large piles of dust are quickly swallowed by its rubber extractors, which replace the traditional brushes. On this point, the Roomba offers unquestionable performance.

Above all, thanks to its high autonomy (a little more than 1h20 according to tests), it is able to cover large surfaces without having to go back and forth to its base.

On the other hand, when it encounters small obstacles or thick carpets, it doesn’t do much better than its rivals. So it’s still fairly easy to catch a failure; just leave a cable or slipper lying around and receive a failure notification on your smartphone.

In the end, like other vacuum cleaners, the i7 won’t spare you from prior storage.

Finally, one of the characteristics of this Roomba i7+ should not be overlooked: its insane noise. Because if the iRobot’s high-end robot sucks well, it also makes it heard. 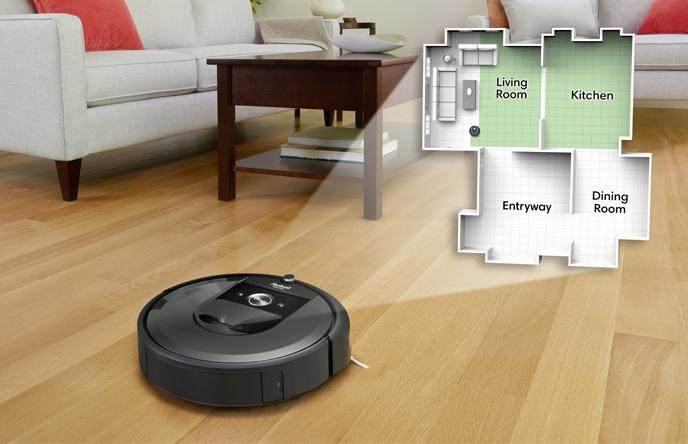 iRobot was the first vacuum cleaner manufacturer to offer mapping on its machines. It is also, without a doubt, one of the manufacturers that masters it best.

After a few learning passages, the i7+ was able to perfectly reproduce the space of our test area.

In addition to the basic scan of each room, Roomba’s i7+ also features Roomba’s in-house iAdapt technology, which allows it to model and memorizes the location of furniture and other obstacles to optimize its route.

This is achieved by using a discreet camera discreetly housed on top of the i7+.

In this, it differs from models that use a laser rangefinder on their hood. This choice is not only more technically advanced, but it also allows Roomba to be finer and allows it to pass under certain sofas, where its competitors would be forced to go around.

As soon as the mapping is known, the robot is even able to distinguish one part from another and offers its owner to label them in the application.

This a priori basic functionality actually allows the robot to manage its vacuum cleaner even more by choosing, if necessary, parts to be cleaned first or more often.

Here again, this is a rather rare feature among robot vacuum cleaners despite its obvious usefulness. 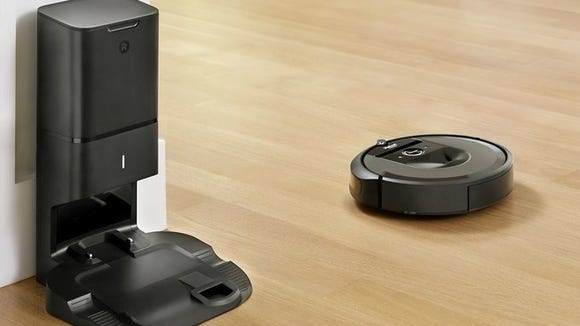 iRobot has not only improved its robot, but it has also worked on its control tool, understand the application. It has evolved in the right direction and is not only more readable but also easier to use.

The application not only allows you to control what Roomba is able to do (programming the different passages, the zones to be cleaned or even manually delimiting the rooms) but also to have an overview of what it has already done.

Indeed, a glance at the maps allows us to visualize the cleaned areas and by extension those that are less accessible to the robot.

The application also allows us to know the state of the components of its vacuum cleaner and to plan, when necessary, their replacement.

What Is Forex And Currency Exchange?