Here is the second generation of the Audi RS7 Sportback which makes its grand premiere at the 2019 Frankfurt Motor Show. The supercharged five-door coupe finally shows its muscles.

Discovery of the rival of the BMW M8 Gran Coupe and the Mercedes-AMG GT 4-door 63S.

Audi’s got a flair for the dramatic. When we discovered the new Audi RS7 Sportback, it was hiding under an airy, immaculate white canvas structure. A light, floating fabric that contrasts perfectly with the intense dress of the beast.

The rival of the BMW M8 Gran Coupe and the Mercedes-AMG GT 4-door 63S does not leave one indifferent.

The front bumper has a manly design, reminiscent of the new Audi RS6 front end, and for good reason, the two cars share a common muzzle.

The rocker panels are decorated with an insert that visually lightens the assembly. At the rear, the bumper integrates the two ovoid exhaust tailpipes typical of the RS range, which can be lacquered in black or chromed, like the four rings.

A carbon pack also brings a touch of exclusivity. At the end of the tailgate, the mobile wing comes out at 120 km/h. 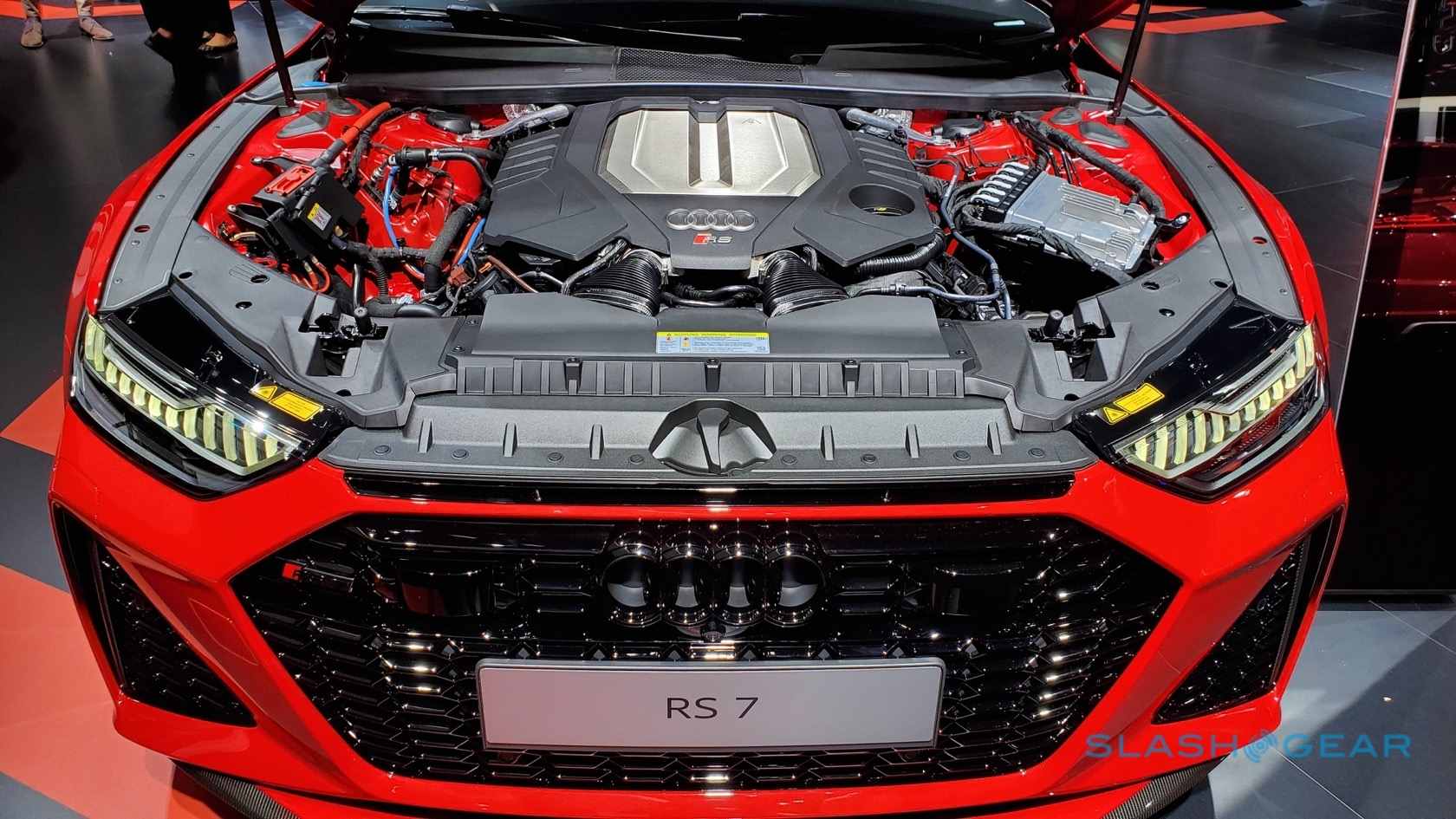 Under the bonnet, the V8 4.0 twin-turbo engine delivers 600 hp with a torque value of 800 Nm and is combined with an eight-speed Tiptronic automatic transmission.

But if you have the soul of a record-holder – across the Rhine of course – it is possible, by subscribing to the dynamic pack, to reach 305 km/h.

At this speed, the carbon-ceramic brakes will be appreciated to stop the machine. With a diameter of 440 mm, the front discs have 10 pistons and at the rear, their size is 370 mm.

To gain in agility and maneuverability, this ballerina weighs in at a very low weight. 2,065 kg (that’s 130 kg more than the previous generation) will be able to count on its four-wheel steering.

But depending on the circumstances, the rear axle can take up to 80% of the torque. The temperament of the car is thus very propulsion-oriented. 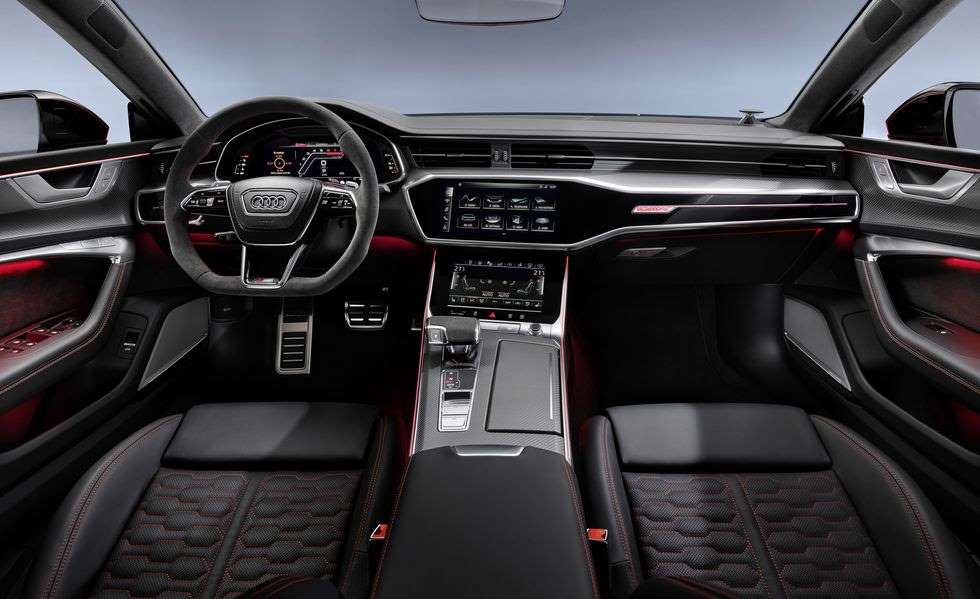 But while it’s a bit of a “Vmax” on the German autobahn (250km/h electronically limited, 280 km/h, and even 305 km/h with the Dynamic and Dynamic Plus pack options checked), its accelerations also make you dizzy on the road.

In other words, it pushes this RS7 Sportback hard, instantly, nastily, and almost all the time. With disconcerting ease and without overdoing it, the V8’s sound remains relatively unobtrusive, even in the most aggressive driving modes.

Not to spoil anything, it also benefits from an excellent Tiptronic automatic gearbox that is both transparent and fast.

This transmission is very efficient when downshifting and even allows you to save precious gestures when you’re “coming out” at unmistakable speeds as you enter corners.

In this kind of delicate situation, with such a machine weighing more than two tons, you can also count on the efficiency and endurance of large carbon-ceramic brakes (optional) with 440 mm discs and 10-piston calipers at the front! Happy, too, to be put in complete confidence by the Quattro all-wheel-drive system (with mechanical center differential) that ensures flawless traction and absolutely imperturbable balance when exiting corners where you can accelerate without question.

As an option, it is possible to add the rear steering wheels and Quattro Sport rear differential, which improve agility, as well as the DRC (Dynamic Ride Control) suspension, which reduces roll and pitch movements. Thus equipped, the RS7 Sportback even seems to defy the laws of physics.

Despite its 5 meters long and its more than 2 tons, it is certainly, on twisty roads, even more, efficient and faster than a very good GTI! Great art, incredible driveability and, as a bonus, a pleasure à la carte, since the RS7 offers six driving modes, including two specific, more aggressive modes called “RS1” and “RS2”, which are called from the steering wheel.

Faced with such a talent in these extreme situations, one would almost forget that this RS7 also knows how to show its white paw in traffic, roll out the road on a simple trickle of gas and ensure real comfort during long family rides.

It also knows how to impress you with its exclusive interior design and satisfy your thirst for technology with its more than 30 driver assistance systems. 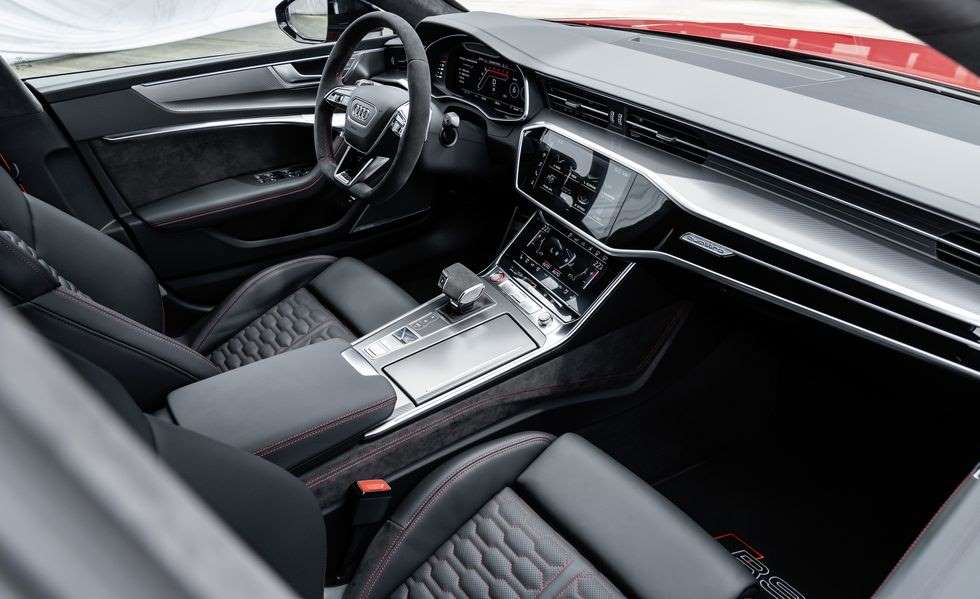 And it even makes a small gesture for the planet with its lightweight 48-volt hybrid system which, coupled with the system that deactivates four of its eight cylinders in certain driving situations, would allow, according to Audi, a fuel economy of about 0.8 liters… In short, the deliciously bipolar side of this RS7 Sportback, displayed at the very least at €130,000, is also its charm.