Forget the car, you are in an Audi A8, OLED touch screens with haptic feedback, massaging and ventilated seats, Bang & Olufsen audio system, advanced technologies including a laser radar system that, combined with other sensors, will allow him to drive alone under certain conditions. 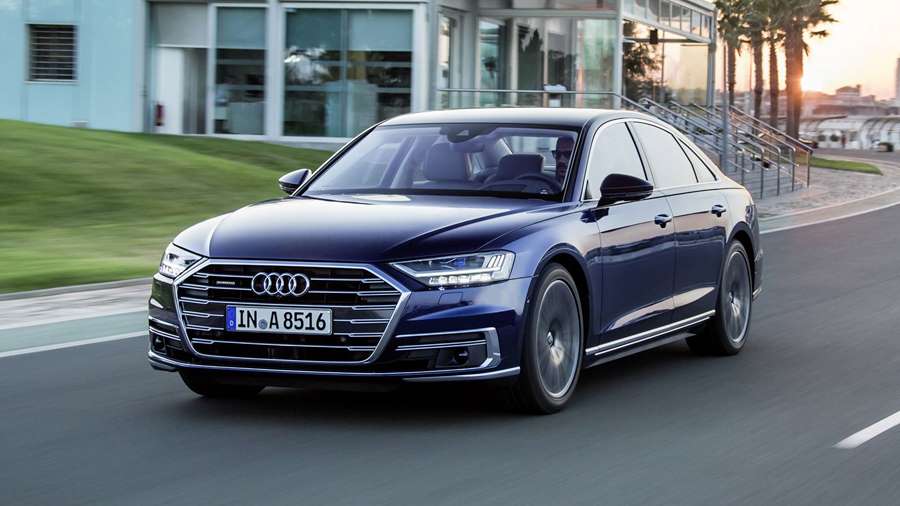 Audi A8 Reviews, Interior and Pictures a Luxury Car

The flagship of the brand with the rings, the new A8 offers a new look and above all new technologies that make it a monster on the road.

This luxury sedan impresses both its intelligence and its driving assistance technology.


One of the most striking features is the controlled suspension that constantly compensates for road imperfections to offer maximum comfort.


Audi offers this grand tourer in several versions, classic and limousine, but also with several engines, including hybrid engine systems (Audi A8L e-Tron) for which the manufacturer will offer wireless charging by induction.


When you love, you don’t count! It’s probably on the basis of this premise that Audi has imagined its new A8.
Intelligent headlights


HD Matrix LED projectors with laser illumination (optional) are the ultimate in lighting.


They combine LED technology, renowned for its excellent energy efficiency and high level of illumination, with laser beams that increase the range by 100%. At night, you’ll feel like you’re in the middle of the day.


What’s more, thanks to a camera placed on the windscreen, the system is able to recognize the light sources coming in front of it and switch off some of the beams so as not to dazzle oncoming drivers.


Because there are more light segments than in traditional headlamps, efficiency is improved. In addition, switching the beams on and off is managed automatically, allowing you to concentrate more on driving. A real gain in safety and comfort.

A luminous signature of a new kind 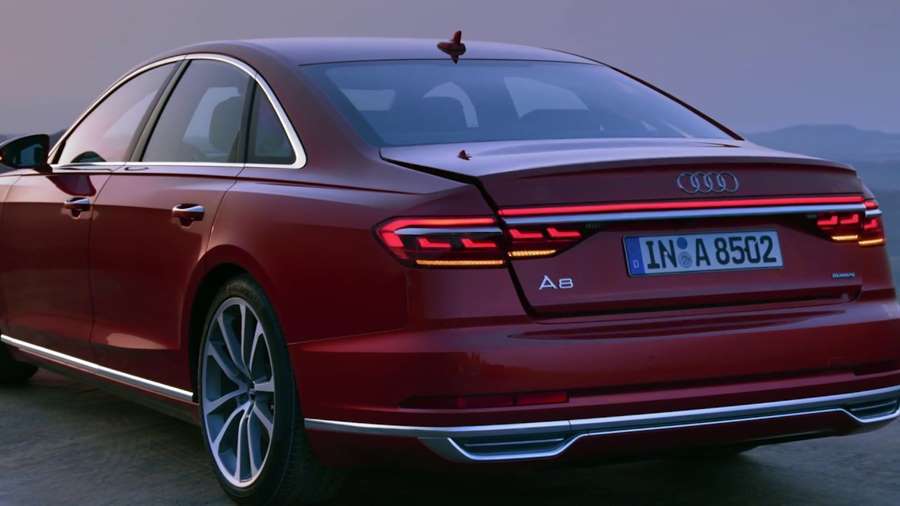 At the rear, the Matrix OLED (for “Organic Light Emitting Diode”) lights are distinguished by their revolutionary and forward-looking design and the way they come to life.


At night, your Audi A8 is recognizable among a thousand thanks to its multiple LEDs combined with the OLED system. The lights also illuminate in a characteristic way every time you open or close your vehicle.


They are pleasant to look at and also enhance safety by providing increased visibility.

Up to 41 driver assistance systems 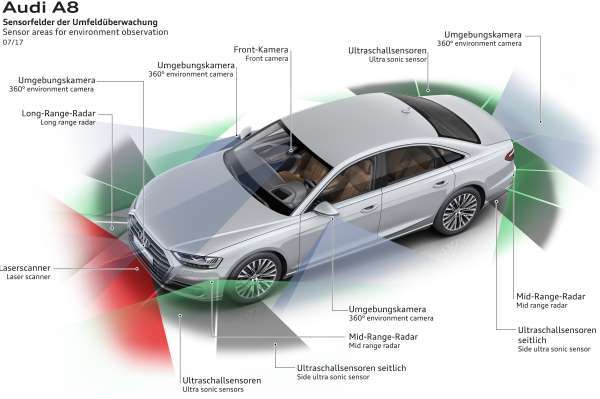 The Audi A8 has an arsenal of first-class driving aids to help you drive with complete peace of mind.


Whether you’re on the highway or in town, the many available aids help make your journey safer and more enjoyable.


No less than 41 driving aids are always working, analyzing the route and driving situations to identify potential hazards and provide you with additional information. One more step towards independent driving.

Audi A8 a luminous and refined atmosphere 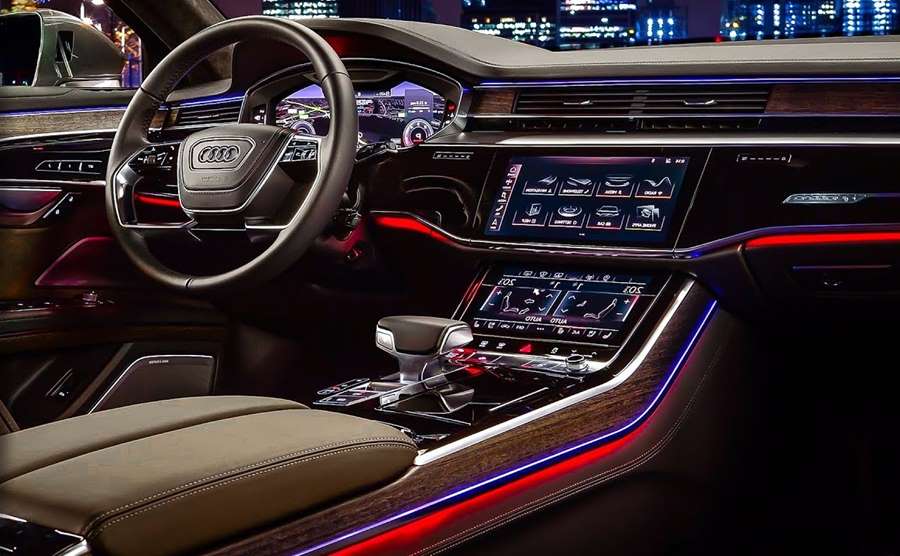 Onboard, this ship of the road is nothing but luxury and pleasure. It has a sleek new dashboard marked by the abandonment of the current MMI system based on a rotating wheel and shortcut keys to control the traffic in the information screen.


Instead, there are two superimposed touch screens that fit perfectly into the center console, using black panel technology.


The top 10.1-inch touch screen houses all multimedia, navigation and application management functions. When switched off, it blends perfectly into the fascia panel.


The lower panel controls the comfort and air conditioning functions. The driver is faced with the virtual cockpit that appeared on the TT. 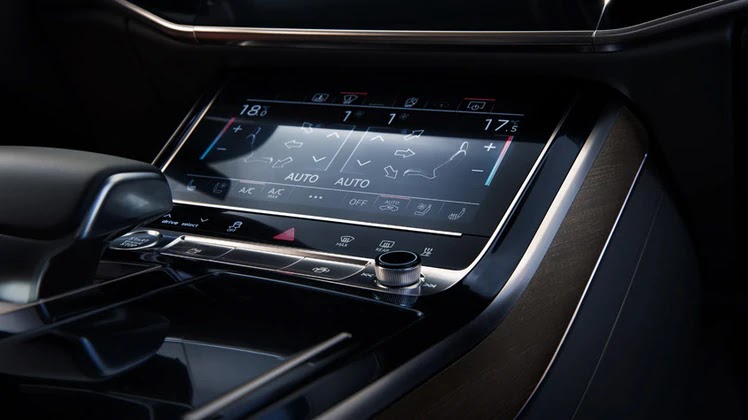 It’s a pity: the interior of the successful Prologue concept, which took us into the future, has been postponed.


That doesn’t prevent the new Audi limousine from offering a new experience in motoring.

Simply touch or scan the touch controls with your fingertips to control the desired function.


The next-generation displays on the Audi A8 are more intuitive than ever. The interface is kept to a minimum for ergonomic reasons. You can also control the various functions with your voice.


In a world exclusive, the artificial intelligence of the Audi A8 has been programmed to learn words by initiating a conversation with the vehicle’s occupants rather than predefined word sequences. 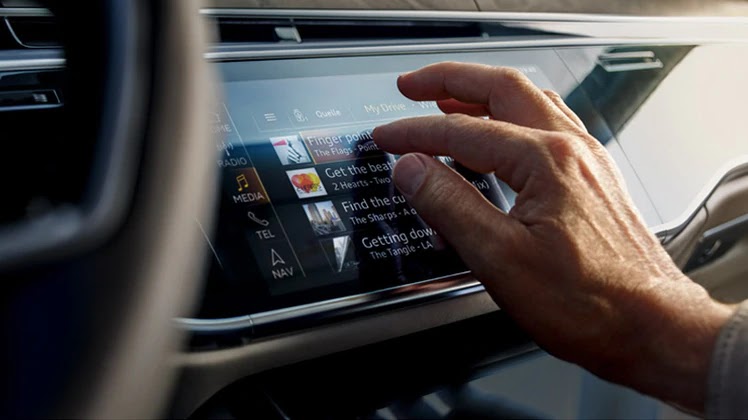 Enjoy a next-generation, state-of-the-art navigation system with MMI Navigation Plus with MMI touch response. It’s easy to navigate with detailed maps, and it’s ergonomic too, with just a touch of the screen to control it.


The multimedia package would be nothing without an MMI touch response. With it, you can set up the multiple functions as you wish and save the ones you prefer. You’ll be sure to have an Audi A8 that’s just like you.

Sophisticated, progressive, and sporty – the new Audi A8 defines the style of the entire brand.


Starting at the end of January 2018, there will be an extended equipment range for customers who want to give more importance to the dynamic appearance of their luxury sedan.


The exterior sports package and sports seats accentuate the strong presence of the A8.


The Exterior Sport Package includes an aluminum strip under the wide single-frame vertical grille, exclusively for the Audi A8.


This gives the brand’s flagship model an even stronger visual impact. Clear contours surround the air inlets, while honeycomb grilles and a vertical spacer define their internal structure.


The rocker panels become wider as they approach the wheels – a clear reference to the standard Audi A8’s Quattro all-wheel drive.


The redesigned rear bumper incorporates a grille and diffuser with clear contrasts. At the sides and rear, an aluminum strip echoes the design of the front splitter and serves as the lower edge of the body.


Customers in Germany and other European markets can order the sports exterior package from the end of January 2018 at a price of EUR 1,950 for the Audi A8 50 TDI.


Its launch also marks the introduction of the Daytona gray exterior color for the luxury sedan.

Will Audi A8 drivers on the road even wish for slowdowns and traffic jams? 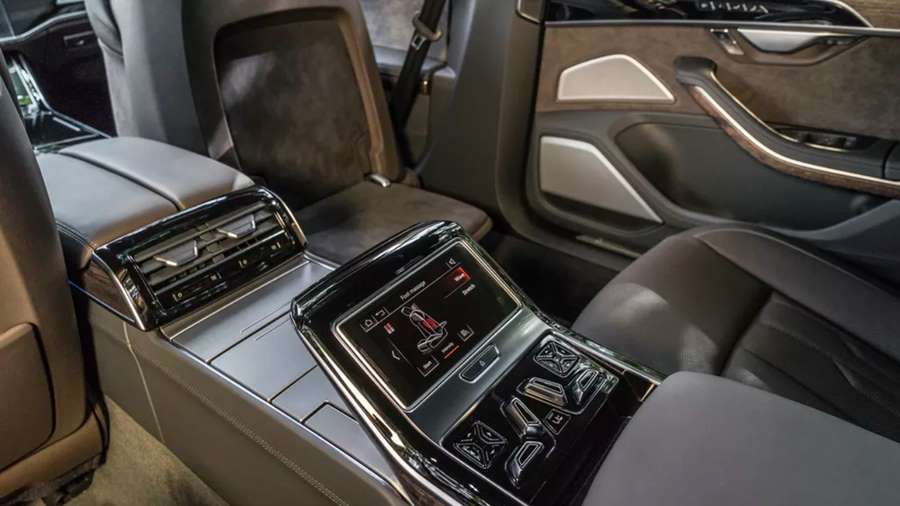 Without prejudging their aspirations, these phases where traffic moves in an accordion-like fashion will allow them to devote themselves to something other than driving.


Without risking an accident and in complete peace of mind, they will be able to take their hands off the wheel and indulge in a sport that has become the favorite addiction of the human race, consulting the smartphone, or watching television.


If they face the possibility of being punished by the police, they can always retort that their new road vessel, the fourth generation of Audi’s luxury limousine, is equipped with the Level 3 autonomous driving system.


In the race for technological leadership by the top tenors of the top end, the new Audi A8 is at the forefront by being the first model to be equipped with the autopilot in traffic.


Called “Audi AI traffic jam pilot”, this system, which consists of entrusting the controls to the vehicle, relies on an army of radars, a camera, ultrasonic sensors, and a laser scanner.


This automatic pilot operates between 0 and 60 km/h, on the motorway or on expressways separated by a rail or an embankment.


Similarly, drivers will now be able to do without the drudgery of putting their A8 in the garage or parking it on the street.

With the “garage pilot” or “parking pilot” already seen on the BMW 7 Series, the anxiety of parking in a narrow space or in a garage is a thing of the past.


The driver follows the completely autonomous parking of his Audi from a distance. This is no luxury because the fourth generation is even bigger.


The majority of the Chinese who are really sensitive to rear-seat space will opt for the long-wheelbase version, which is increased by 13 cm to 5.30 meters.


In the design of its shape and the multiplication of chrome accents, the A8 shows that it is less aimed at European customers than at American or Chinese motorists.


The inspiration for the Prologue concept, which caused a sensation at the 2014 Los Angeles Auto Show, is still there, particularly in the coupe-like roofline and the treatment of the rear end, which is crossed by a luminous fascia and marked by lights that encroach on the flanks, but the silhouette lacks finesse and simplicity. 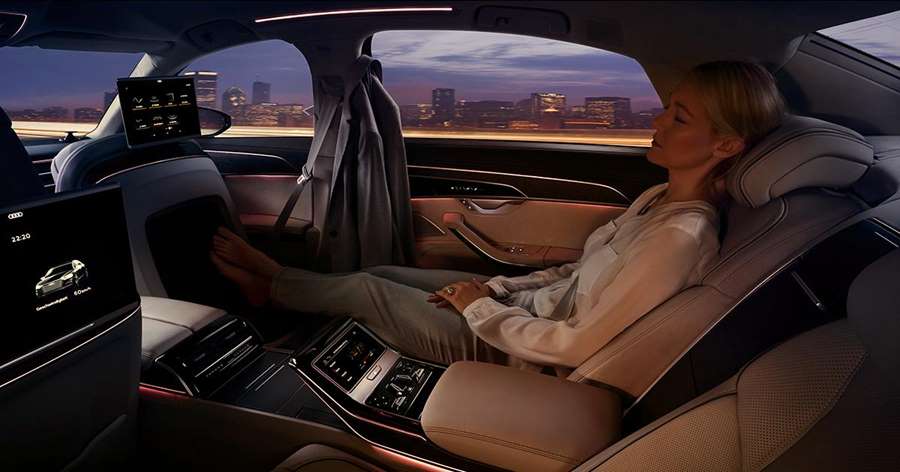 The right rear seat will certainly be the place to be. Provided you opt for the long version, this king seat offers features worthy of the first-class aircraft.


This configuration will be able to accommodate a system that is sure to amuse young and old alike. At the back of the front passenger seat, the A8 L is equipped with a device for massaging and warming the soles of the feet.


In its executive version, the two rear seats are separated by a console that includes a touch-sensitive tablet.


The console can be pulled out and controls the sunroof, electric side window blinds, HD Matrix lighting, ambient lighting, air conditioning, and hi-fi system.


These multiple attentions would be nothing without guaranteeing the first-rate comfort. That’s why Audi engineers have completely redesigned the suspension, which can now fly over all the irregularities and deformations of the road, producing the effect of a magic carpet.


Based on an electromechanical control system that drives each wheel individually, the system is powered by the primary 48-volt electrical grid. The active suspension will only be standard on the W12 version.


Thanks to the front camera, the A8 detects deformations in the road surface at an early stage and can thus prepare the suspension to absorb them in complete comfort.


Developed on the MSB platform shared with the Porsche Panamera, the A8 adopts a four-wheel drive as standard. The optional four-wheel steering will provide additional dynamism and agility.

The switch to the 48 V network also allows the generalization of light hybridization to the whole range.


This system, based on starter-alternator technology, promises lower fuel consumption of up to 0.7 l/100 km thanks to its freewheel function when the engine is switched off when approaching a traffic light.


The system can also recover up to 12 kW of energy during deceleration phases. The new generation of engines belongs to the Kovomo program of the VW Group.


The importance of the Chinese market has made it necessary to maintain the 6-liter W12. It will be launched in the course of 2018, as will the e-Tron plug-in hybrid version.


The latter has a combined output of 449 hp thanks to its 340 hp TFSI V6 engine combined with a powerful electric motor.


This is enough to cover up to 50 km without wasting a single drop of fuel. The only problem is that the A8 e-Tron will only be available in the long version. All engines are combined with 8-speed automatic transmission.


The new A8 will be launched next November at a price close to €91,000. It will be powered by the BMW 7 Series launched in the autumn of 2015 and the segment benchmark, the Mercedes S-Class, which has just undergone a mid-career makeover.

Autonomous vehicle: what are the differences between the levels of autonomy?